Discover the sights of Buchen with the click of your mouse: 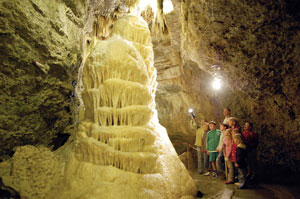 Enter Buchen’s underworld – the stalactite cave in the Eberstadt quarter of Buchen has been discovered by accident. On December 13th in 1971, in the course of a blasting in the lacustrine limestone quarry, a 1 metre high and 2 metres wide gap opened up.

Already the first careful explorations gave an indication of the breathtaking beauty of this natural monument, a unique occurrence in southern Germany. With its variety of forms, the Eberstadt stalactite cave has an unforgettable effect on every visitor. 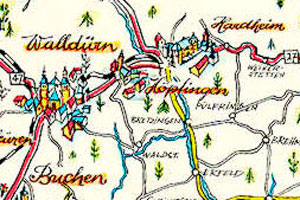 The Madonnenländchen combines the Baden part of the Odenwald, as well as some of the Bavarian part, and Bauland up to the Taubergrund. It encompasses a romantic holiday landscape where it is easy to unwind and relax.

The name Madonnenländchen is not a geographic term but has been coined by the locals. Various Madonna statues on houses as well as a variety of shrines by the side of the road enrich the local landscape. The Madonnenländchen combines the Baden part of the Odenwald, as well as some of the Bavarian part, and Bauland up to the Taubergrund. It encompasses a romantic holiday landscape where it is easy to unwind and relax. 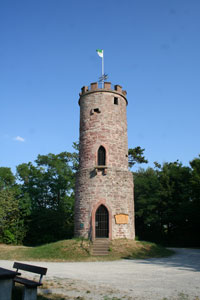 The watchtower is 14 metres tall and is situated on a hill called “Wartberg” (394 metres above sea level) to the southeast of Buchen. According to its inscription is has been constructed or rebuilt in 1490.

It was used as an observation tower in times of war, in order to be able to warn the population of the highly fortified medieval town of advancing enemy troops. As can be seen in the oldest illustration dating from 1593, at that time the tower, equipped with a hipped roof, was freestanding to facilitate the unobstructed view in all directions.

The tower consists of a circular substructure (5 metres tall and with a 5 metre cross-section) and a superstructure of only 4.4 metres. Due to the different wall thicknesses of the substructure (1.2 metres) and the superstructure (0.95 metres), there are assumptions as to whether the lower part might be 200 years older and thus has been built during the first encirclement of Buchen. However, both material (rubble stone) and technique do not indicate any difference. 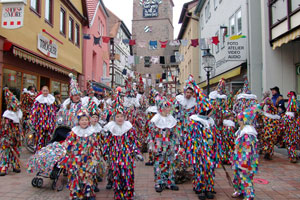 The famous “Buchener Faschenacht”, with a tradition reaching back over 500 years, has turned Buchen into the carnival centre of the Baden part of Franconia.

The carnival association “FG Narrhalla” was founded in 1879 by the amalgamation of individual carnival societies. Hundreds of “Huddelbätzen”, the famous Buchen carnival figure, entertain the crowd with their singing and dancing. They are present at the traditional Buchen “Gänsemarsch” on Carnival Sunday and the big procession on Shrove Monday.

The well-known Buchen carnival slogan “Hinne houch” (‘up at the back’) can be heard in all the colourfully decorated streets and alleys. Also present at every event is the “Buchener Blecker”, the medieval symbol of the Buchen carnival. Everyone has to pay their respect by kissing its backside, a ‘must’ during the carnival week. The importance of the Buchen Faschenacht becomes obvious when looking at the success of the “FG Narrhalla” which has hosted the international carnival festival (Narrentreffen) three times already, in 1980, 1990 and 2002. With their colourful appearance and their temperament they impress local and international audiences. Their connections reach far beyond the city limits. More information on the Buchen Faschenacht: www.huddelbaetze.de

The famous „Buchener Faschenacht“ (carnival), with its more than 500 year tradition, has made Buchen the carnival centre of the Baden part of Franconia.

The persons in charge of the Buchen Faschenacht have for years been collection costumes, medals, publications and documents which are on display in the guildhall.

The limes and roman forts

The word Limes means “the man-made route cutting straight through an area, an axis for the survey of land or a lane connecting two separate regions.”

We do not know for sure, whether the Roman Empire did have a frontier in the modern sense. The Limes was not only constructed in Germany but along nearly all borders of the Roman Empire.

From the North to the South and from the West to the East it formed a frontier of the Empire, which was easy to defend thanks to its varying forts. The border of the Roman Empire ran along the Koblenz area and over 500 kilometres up to the Danube and therefore constitutes the biggest ground monument in central Europe. 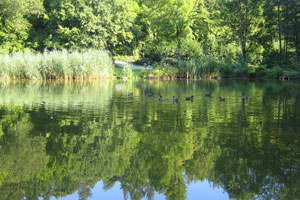 The idyllic recreational park "Hasenwäldchen" (The Bunny Grove), situated between Buchen and Hettingen, is an ideal spot for a family outing. Children will appreciate the two playgrounds, while families can enjoy the many aviaries, nature and wildlife preserves and the “Daunsee” lake. A popular place to visit is the restaurant “Zum Hasenwald”.

At the gateway to Buchen, in the Hollerbach valley, lies the man-made “Hollersee” lake. The Hollersee region is surrounded by walking trails and picnic areas. Hollerbach itself is known for the Mother Church of the Odenwald (along the museum trail at the Odenwälder Bauernhaus) and the local artist community Hollerbacher Malerkolonie who won the gold medal in the “Unser Dorf soll schöner werden” (We’ll make our village prettier) competition