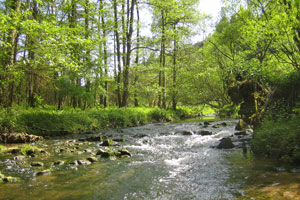 The town of Buchen is situated in the Natural Park Neckartal-Odenwald. This natural park was founded in 1980; its administrative centre is in Eberbach.

With its expanse of more than 130,000 hectares, out of which 50% are covered with forest, the park is one of Germany’s biggest natural parks. Natural parks are spacious nature reserves, which, due to their natural premises, are especially suited for recreation purposes. The main concern of the natural parks is to combine the protection and the utilisation of these cultural landscapes.

One of the most beautiful valleys in the north-eastern Odenwald is the Morre Valley in Buchen. It has already been a designated nature preserve in 1940. The river Morre originates west of Buchen in the Hettingen district. It then runs through the former Kreisstadt (district town) and cuts into the upper and medium layers of the variegated sandstone in the north-west. It runs towards the Marsbach, a tributary stream of the river Main, in an ample box valley.

The river was able to form beautiful meander in the wide flood plain; they have been preserved until now and have not fallen victim to the technical development of the bodies of water. The headwaters, running through the flood plain, are lined with alders and connected to meadows. Successions of wetland provide a natural habitat for a variety of distinct animals and plant species. Hardwood predominates the dense mixed forest that covers the steep slopes of variegated sandstone lining the valley.

Thanks to consistent environment protection, the Morre serves as an excellent example of the recovery of a natural habitat that seemed to have been destroyed. Up until the late 1950s the river, which was famous for its abundance of trout and its high oxygen level, has been ‘dead’. Today the Morre is once again populated by a variety of fish, feeding on numerous insects, larvae, baby crabs and other tiny organisms, all of which now thrive once again in the clean waters.

The Morre valley is also called "Mühltal" (mill valley) because of several mills situated in its headwaters. It is a very popular destination for recreation and hiking.